As my husband gets worse, I am feeling a sense of hopelessness.  He has his good days, and bad, but he is never completely his self anymore. I think the worse is when he wants to leave the house and go home it is so hard to talk him into staying. I tell him this is his home, but he is convinced otherwise, and it is usually right before bed so pretty late at 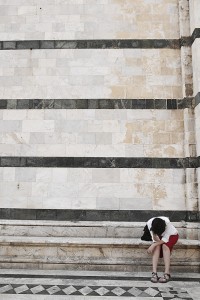 It really hit home when we visited his neurologist yesterday,  knowing we were going out of town in a few weeks, she gave me a card to put into his wallet.

It said, “I have a disorder of the brain known as LEWY BODY DEMENTIA (LBD) which could make me appear confused and have difficulty moving or speaking normally.”  How sad, it made me want to cry; the card talks about the drugs that are bad for him and information for contacts.

I did find a fantastic  website that gives so much information on the subject of LBD. It actually says on the website that a lot of physicians don’t even know what it is and miss the signs. A lot of times thinking it is Alzheimer’s giving drugs that make LBD patients worse.

We are so lucky we had good doctors from the start – we had a neurologist who realized what my husband had was not regular Parkinson’s and send us to the university specialty clinic for movement and brain disorders. That is where he was diagnosed and has been being treated.

His sister has been coming around more often and taking him to exercise this is so good – especially when he cannot talk English, he talks to her – she understands. Nothing makes me happier than seeing him smile, and feel loved. Getting out of the house in this beautiful weather makes everything seem better.

For any of you, who would like to know more about Lewy Body Dementia (LBD). This is a great website.

My life has been full of twists and turns. I have been wanting to do a personal blog for a long time and so here it goes. To know who I am and what I am about - subscribe! Looking forward to your comments.
View all posts by Sarah Maude →
This entry was posted in Challenges, Dementia, Parkinson's Disease and tagged Alzheimers, caring for the elderly, hallucinations, Lewy Body Dementia. Bookmark the permalink.