I have started feeding my husband more finger foods – I do still make curry and tradition Indian food, but I usually feed him with that. The other night I gave him curried chicken with Nan (bread) when the Nan was gone; he was rolling it up with the paper towel and eating it.

A few nights ago I cut up some little crusty sandwiches and made some spicy – sweet honey mustard. He loved it – he was chowing 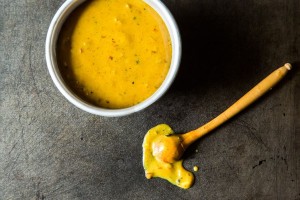 down and ate the whole small bowl of spicy mustard with it. At 3 in the morning, he wakes up with tremendous pain in his bottom left rib. Moaning and seeming out of breath. I tried to make him comfortable nothing worked so I called the nurse who had me open up the emergency pack she gave me. Inside were different syringes of medicine one of them was morphine. He doesn’t take any pain medication, so I was really hesitant to give it to him, but the nurse reassured me. It was a very small dose.

Then I gave him a Zanax because he was so upset and making things worse. He fell asleep as I was looking up what it could be on my phone the number one this was heartburn, indigestion. I know that can cause severe sharp pains – I believe it was the mustard he ate didn’t agree with him.

Years ago, I had a dog named Willey, and I would feed him table scraps, one day I  feed him some spicy mustard to see what he would do. He ended up with pancreatitis,  I had to spend over 1000.00 to get him well.

I almost killed my dog with mustard and now my husband.

The next day he would not get up he just sleep no pills no eating no drinking. I was worried he is already dehydrated. The nurse came his vitals are OK the medicine just knocked him for a loop. Then yesterday we got him out of bed, but he really didn’t know what was going on. He was unaware of anything and was just wide-eyed and tarring. When I would talk to him, he would answer back but not in a way I could understand.

Now I am really worried – maybe I shouldn’t have given him the medicine could that have caused him to digress, will he get any better.

My heart  is breaking into a million pieces….

My life has been full of twists and turns. I have been wanting to do a personal blog for a long time and so here it goes. To know who I am and what I am about - subscribe! Looking forward to your comments.
View all posts by Sarah Maude →
This entry was posted in Challenges, My Life, Relationships and tagged dementia, help with dementia, mustard heart burn, Parkinson's Disease, Surviving a Sick Husband, terminal illness. Bookmark the permalink.